I saw this guy up close on my last scuba dive in Lauderdale by the Sea. He was super fast, extremely elegant almost graceful in the water. The one I spotted was flitting in and out of the coral reef crevices. 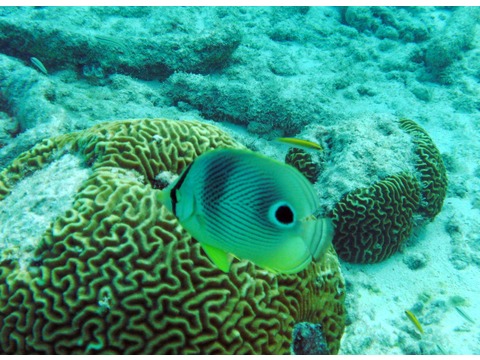 The four eye (sometimes 6) butterfly fish is pretty common and is found Massachusetts and Bermuda to northeastern Venezuela, including Florida, the Bahamas, the Antilles, and the coastal waters of the Gulf of Mexico and the western and southern Caribbean. t is easy to identify because of the extra pair of camouflage spots that look like eyes. It has a whitish to yellowish body with a yellow-edged black bar running across its head through the eye. On the upper half of the body the scales form rows that slope up and back, while on the lower half they slope down and back. The dark edges of the scales form thin lines that follow the scale rows, producing a chevron-like pattern at mid-body. The juvenile has an additional eye spot_ on the soft dorsal fin which is smaller than the body one, and two wide dusky body bars. As the juvenile grows, the dorsal eye-spot disappears first, followed later by the dusky bars. Adults grow to 6 inches in length; ocellated juveniles to 2.5 inches.

They inhabit coral reefs in shallow water (10-60 feet) where by day they swim about, usually in mated pairs, searching for food. Like its relatives (the anglefish) they mate for life and therefore they will often be seen in pairs. They are one of a few fish that mate for life. Butterflyfish and angelfish are members of the bristle tooth family (Chaetodontidae) they have very fine hairlike teeth that enable them to pick out small organisms inaccessible to most other fish for eating.
Butterflyfish thrive on a diet of coral polyps, tentacles of featherdusters and Christmas-tree worms. As these food sources all zap back into their shells the butterflyfishes need to be able to hover motionless while picking at the coral and to dart swiftly over short distances to get the worm before it retracts. They do this by using their Pectoral fins as oars to brake, sprint, turn and even reverse. Like the parrotfish and wrasses, butterfly fish swim by synchronous rowing strokes of the pectoral fins, while the tail fin is used as a rudder for direction and balance. They are capable of very rapid movement and rely largely on their agility to avoid capture from other larger species. This fish is known for its uncanny ability to swim in and around coral heads and reefs. They are able to find their way through the most intricate passages by swimming on its side or even upside down.

Usually oblivious to divers, they retreat when approached too closely. The Four-eyed Butterflyfish’s first instinct when threatened is to flee, putting the false eye spot closer to the predator than the head. Most predators aim for the eyes, and this false eye spot tricks the predator into believing that the fish will flee tail first. When escape is not possible, a Four-eyed Butterflyfish will sometimes turn to face its aggressor, head lowered and spines fully erect, like a bull about to charge. This may serve to intimidate the other animal or may remind the predator that the butterflyfish is much too spiny to make a comfortable meal.